Christmas town! In August! Our trip to Bethlehem was a welcome retreat from Nablus. Not that we don’t love Nablus; we’re just getting a little too comfortable with living there, and really need to see more of Palestine before we leave. Sometimes I forget that we’re in the Holy Land, but Bethlehem definitely makes you remember. This place has, like, seventeen different churches belonging to sects from Greece, Syria, Russia, etc., as well as mosques and other religious sites. The one we made sure to visit was the Nativity Church, where Jesus was supposedly born (although it’s one of forty different places that claim the same thing, and I’m pretty sure he was only resurrected once).

The culture of Bethlehem is radically different from that of Nablus, most likely due to the heavier Christian demographic here. Then again, every city in Palestine seems to have its own unique mix of people of social attitudes. We had just barely reached Manger Square when a middle-aged local swept us up and began to give us a free tour of the sites. At first we were wary, because we thought he had an agenda. And he did in a way, but he didn’t want money, or even to convert us politically or religiously. Like many other Palestinians, Saeed noticed we were internationals, and wanted to share his story and perspective with us, in the hopes that we might pass it along when we return home.

So Saeed talked to us as we walked past olive wood shops and souvenir stands. He told us how most Palestinians feel that Western media portrays them unfairly while denying them a voice on the conflict with Israel.  He stopped in a woodworker’s shop to take pictures of Christmas ornaments for an American family, who wanted to buy straight from the factory in Bethlehem. I asked how he met them. “I was giving a tour to these Christians from Ohio, you know, showing them the churches and the shops. They’re pro-Israel, but I still gave the tour, no problem. They looked at me and said, ‘But you’re Palestinian. You’re like one of those terrorists. But you’re such a nice guy!'” He went on to tell us they’re still pro-Israel, but gradually beginning to understand the Palestinian perspective. All sorts of visitors come to Bethlehem: Arabs, Americans, Israelis, Jews, Muslims, Christians. Saeed is happy to give tours to all of them; he just hopes that by talking with them, he can help them form a better understanding of the Palestinian people. 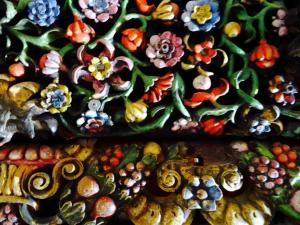 (Painted wood carvings from inside the Church of the Nativity)

In one shop, we ran into some Germans and learned they were volunteers, which immediately sparked a conversation. As it turns out, they’re musicians as well: they work for Brass for Peace. Of course, as a trumpet player, I geeked out. The woman we were speaking to plays trombone, and apparently this organization specifically focuses on teaching brass instruments to teenagers in Bethlehem. I had  no idea something like this even existed, but I’m starting to realize just how many different volunteer organizations come to Palestine. We’ve come across theater troupes, women’s programs, Doctors Without Borders, church groups, housing reconstruction teams, the EAPPI, and every kind of infrastructure and healthcare unit, all run by NGOs and administered with the cooperation of local Palestinians. Funding is hard to come across, but it’s encouraging to see that there are so many volunteers willing to come support the people here.

The shops and churches were nice, but after our tour we went on to our main priority in Bethlehem: the Separation Barrier that runs right through the middle of the city. I mentioned it in my second or third blog post, but today I got a much closer look at it. This wall is an 8 meter high sheet of concrete that cuts the city in half, and the bottom half of it is completely painted with anti-occupation posters and graffiti, some of it from the world-famous artist Banksy. We spent a good hour just strolling along the wall, taking pictures of the graffiti and reading the stories written over it: 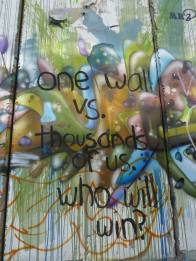 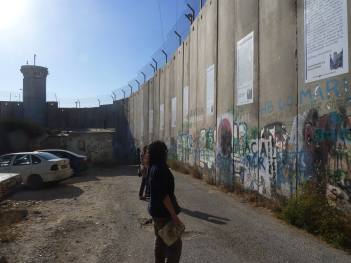 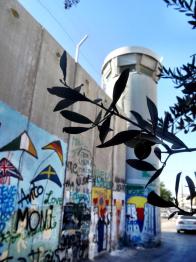 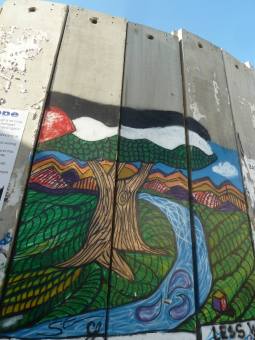 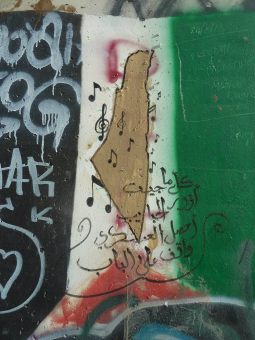 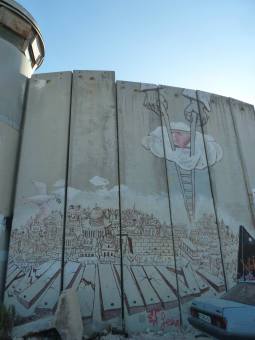 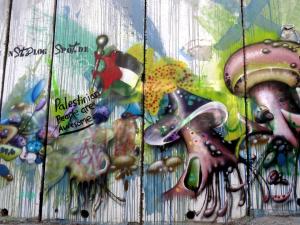 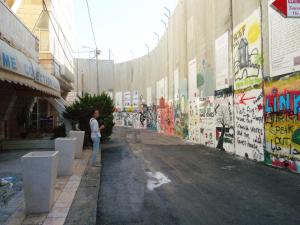 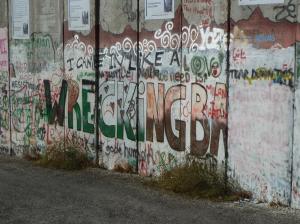 … and my personal favorite: 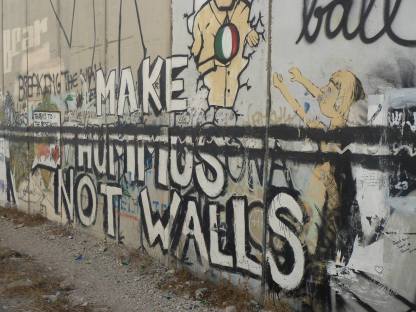